Beginning in 1836, John Henderson, Sr., was one of three of the original large land holders of much of the Pass Christian peninsula.  The Realty Combine owned lands that extended from the Bay of St. Louis eastward to the middle of present day Long Beach.  Within a few years after the dissolution of that partnership, Henderson began trading out his holdings in order to aggregate them within the lengthy expanse from the Bay of St. Louis to Donlin Avenue,  excluding the Charlot Tract, now the center of town area.
John Sr.'s son, Elliot, like his father, became an ardent promoter of Pass Christian as is indicated by the many sales transactions in Harrison County Deed Records.
Along with Elliot, in 1903, his nephew, John Leland Henderson, Secretary of the Mexican Gulf Land Co. advertised the benefits for the sale of  lands in what was the vastly unsettled Henderson's Point.  John Leland lived in Bay St. Louis while his uncle, Elliot Henderson, the company's president, lived at the west end of Pass Christian.
They promoted the area as the only remaining undeveloped tract of land between New Orleans and Mobile having immediate access to rail transportation.  Hendersons Point was described as having 15,000 beachfront feet along the Bay of St. Louis with new wide streets being planned, including plenty of parks, and regular street blocks composed of large lots.  An anchorage basin would be dredged for boat harborage adjoining a proposed club house including  a street car line that would extend to Pass Christian and which would provide transportation to Gulfport and Biloxi.  Leland promised that it would be a planned community.
Following a Hurricane in 1906, and other setbacks, the Henderson dream of growth and promotion had slowed to a halt.  Elliot died in 1913, at age 80, and John Leland Henderson had returned to Oregon.  Elliot had no children, so he deeded his vast holdings to the Hewes Brothers of Gulfport, nephews of his wife Fanny Hewes, who followed Elliot in death a few months later. It was left to Finley Hewes to become the predominant shaper of the company until the real estate holdings were sold.
In mid-1926, a $6,000,000  1400-acre development of Henderson Point again came alive, and was named Pass Christian Isles when it was headed by Allen Johness.  Seven miles of canals and lagoons were dug while the marsh areas and low points were filled with dredged material resulting in the Bay shoreline being set at a minimum height of 12-feet above sea level.
Just a few hundred feet north of the Louisville and Nashville railroad track, a several hundred-foot-square basin was dug and dredged  creating a large yacht harbor which connected the newly dug inland lagoons and waterways to the Bay of St. Louis on the west.  (The harbor basin is now part of the waterway infrastructure which the Sylvester Pagano Bridge crosses.)
Opposite the Harbor (at Bay View Street), a million-dollar plaza was envisioned as a new hub for commercial businesses that had been proposed to be built in Mediterranean style architecture.  (Bradleys night club was the first of two structures completed at that time.) 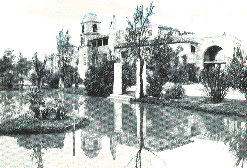 The Pass Christian Isles Company was also in process of negotiating with investors to build a first class resort hotel that would be located on the beach.  (The reality of these plans was the Inn-by-the-Sea which carried
through with the proposed Mediterranean architectural motif.
The venture received  a modicum of success, but once more economic failures occurred with the arrival of the Great Depression of the 1930's  which like many real-estate ventures of the day  went into bankruptcy.
It wasnt until 15 years later, in 1946, when the Wallace C. Walker Land Company bought the failed operation from the New Orleans Canal Bank.  Walker established the Sunset Realty which set renewed priorities by having re-surveyed the land, modified the plats, and sub-divided the area into two subdivisions called Henderson Heights and Pass Christian Isles.  Along with promotions, salesmen were engaged to aggressively promote lot sales and home sites.       An 18-hole Golf Course was constructed, which in 1952 was spun off to the newly formed PCI Golf Club.  The large area north of Boisdoré (Malini) Bayou was also spun off to other developers and named Timber Ridge.  The Golf clubhouse and a large part of the golf greens are situated in Timber Ridge.
Bayou Boisdoré was named by the early French, meaning Golden Woods for the many trees that were strewn along the waterway.  Later, when a large tract was settled by Philip Malini, the trees were used in his lumber mill and boatyard.  Today, the bayou is called both Malini and Boisdoré.  An English map of the Henderson Point area dating to 1778, shows ruins of earlier habitation.
There were more than just a few attempts by the City of Pass Christian to annex Henderson Point and the Isles, all of which failed, with the exception of Timber Ridge and the easternmost part of Pass Christian Isles in 1985.  In 1953, to fight annex attempts, the Henderson Point  Pass Christian Isles Civic Association was formed.   Through the years of continued independence, the local citizens developed its own Sheriffs Auxiliary force and the Henderson Point Fire Department.  It maintains its own Water and Sewerage District and built an administration building on the Bay, which many local folks jokingly call the Henderson Point Yacht Club.